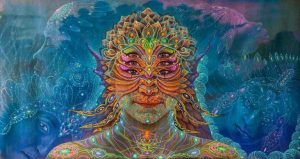 Constantly and unknowingly, we receive influences and inspirations from higher, superconscious regions, which express themselves inside us as ideas, ideals, aspirations, or works of art; they secretly mold our life, our future. Similarly, we constantly and unknowingly receive vital and subtle-physical vibrations, which determine our emotional life and relationship with the world every moment of the day. We are enclosed in an individual, personal body only through a stubborn visual delusion; in fact, we are porous throughout and bathe in universal forces, like an anemone in the sea:

“Man twitters intellectually (=foolishly) about the surface results and attributes them all to his “noble self,” ignoring the fact that his noble self is hidden far away from his own vision behind the veil of his dimly sparkling intellect and the reeking fog of his vital feelings, emotions, impulses, sensations and impressions.”

Our sole freedom is to lift ourselves to higher planes through individual evolution. Our only role is to transcribe and materially embody the truths of the plane we belong to. Two important points, which apply to every plane of consciousness, from the highest to the lowest, deserve to be underscored in order for us better to understand the mechanism of the universe.

First, these planes do not depend upon us or upon what we think of them any more than the sea depends on the anemone; they exist independently of man. Modern psychology, for which all the levels of being are mixed together in a so-called collective unconscious, like some big magician’s hat from which to draw archetypes and neuroses at random, betrays in this respect a serious lack of vision: first, because the forces of these planes are not at all unconscious (except to us), but very conscious, definitely more so than we are; and secondly, because these forces are not” collective,” in the sense that they are no more a human product than the sea is the product of the anemone; it is rather the frontal man who is the product of that Immensity behind.

Naturally, it is only human to reverse the order of things and put ourselves in the center of the world. But this is not a matter of theory, always debatable, but of experience, which everyone can have. If we go out of our body and consciously enter these planes, we realize that they exist outside us just as the entire world exists outside Manhattan, with forces and beings and even places that have nothing in common with our earthly world; entire civilizations have attested to this, stating it, engraving it, or painting it on their walls or in their temples, civilizations that were perhaps less ingenious than ours, but certainly not less intelligent.

The second important point concerns the conscious forces and beings that occupy these planes. Here we must clearly draw a line between the superstition, or even hoax, arising from our “collective” contribution, and the truth. As usual, the two are closely intermingled. More than ever, the integral seeker must be armed with that clear austerity Sri Aurobindo mentions so often. He must not confuse super-reason with unreason. In practice, whenever we enter these planes consciously, whether in sleep or meditation or through deliberate exteriorization, we see two sorts of things: impersonal currents of force, which can be more or less luminous, and personal beings. But they are two forms of the same thing:

“The wall between consciousness and force, impersonality and personality becomes much thinner when one goes behind the veil of matter. If one looks at a working from the side of impersonal force one sees a force or energy at work acting for a purpose or with a result, if one looks from the side of being one sees a being possessing, guiding and using or else representative of and used by a conscious force as its instrument of specialized action and expression…. In modern science it has been found that if you look at the movement of energy, it appears on one side to be a wave and act as a wave, on the other as a mass of particles and to act as a mass of particles each acting in its own way. It is somewhat the same principle here”

Some seekers may therefore never see beings but only luminous forces; others will see only beings and never any force; it all depends on their inner disposition, on their form of aspiration, on their religious, spiritual, or even cultural background[conditioning]. This is where subjectivity begins, and with it the possibility of confusion and superstition. But subjectivity should not undermine the experience itself; it is merely a sign that the same thing can be viewed and transcribed differently depending on our nature — have two artists ever seen the same landscape in the same way? According to the experts in natural and supernatural phenomena, the criterion for truth should be an unchanging consistency of experience, but this is perhaps more likely a criterion of monotony; the very multiplicity of experiences proves that we are dealing with a living truth, not a wooden substance like our mental or physical truths.

Furthermore, these conscious — highly conscious — forces can take any form at will, not [always] to deceive us but to make themselves accessible to the particular consciousness of the person who opens himself to them or invokes them… . For nothing happens “by chance”; everything comes from somewhere, from a particular plane, and each plane has its own wavelength, its own luminous intensity, its own frequency, and one can enter the same plane of consciousness, the same illumination in a thousand different ways. Those who have exceeded, or think they have exceeded, the stage of religious forms will jump to the conclusion that all personal forms are deceptive, or of a lower order, and that only impersonal forces are true, but this is an error of our human logic, which always tries to reduce everything to a uniform concept. The vision of Durga is no more false and imaginary than Shelley’s poem or Einstein’s equations, which were confirmed ten years later. Error and superstition begin with the assertion that only the Virgin is true, or only Durga, or only poetry. The reconciling truth would be in seeing that all these forms come from the same divine Light, in different degrees.

But it would be another mistake to think of the so-called impersonal forces as some improved mechanical forces. They have an intensity, a warmth, a luminous joy that very much suggest a person without a face. Anyone who has experienced a flood of golden light, a sapphire-blue blossoming, or a sparkling of white light knows beyond a doubt that with that gold comes a spontaneous and joyful Knowledge; with that blue, a self-sustaining power; with that whiteness, an ineffable Presence. Some forces can sweep upon us like a smile. Then one truly understands that the opposition between personal and impersonal, consciousness and force, is a practical distinction created by human logic, without much relation to reality, and that one need not see any person to be in the presence of the Person. Practically, the one essential thing is to open oneself to these higher planes; once there, each person will receive according to his or her capacity and needs or particular aspiration. All the quarrels between materialists and religious men, between philosophers and poets and painters and musicians, are the childish games of an incipient humanity in which each one wants to fit everyone else into his own mold.

When one reaches the luminous Truth, one sees that It can contain all without conflict, and that everyone is Its child: the mystic receives the joy of his beloved One, the poet receives poetic joy, the mathematician mathematical joy, and the painter receives colored revelations — all spiritual joys.

However “clear austerity” remains a powerful protection, for unfortunately not everyone has the capacity to rise to the high regions where the forces are pure; it is far easier to open oneself at the vital level, which is the world of the great Force of Life and desires and passions (well known to mediums and occultists); where the lower [hostile] forces can readily take on divine appearances with dazzling colors, or frightening forms. If the seeker is pure, he will see through the hoax either way, and his little psychic light will dissolve all the threats and all the gaudy mirages of the vital melodrama.

But how can one ever be sure of one’s own purity? Therefore, not to pursue personal forms but only a higher and higher truth, and letting It manifest under any form It chooses, will help us avoid error and superstition. We can now try to describe these superconscious levels, as they appear when one does not succumb to ecstatic unconsciousness, and as Sri Aurobindo experienced them. Certainly, what is closest to the universal truth has nothing to do with forms, which are always limited and related to a given tradition or age, but with luminous vibrations. By “vibrations,” we do not mean any lifeless waves of quantum physics but movements of light, inexpressibly filled with joy, love, knowledge, beauty, and all the qualities manifested by the best of human consciousness.

From “Sri Aurobindo or the Adventure of Consciousness” by Satprem 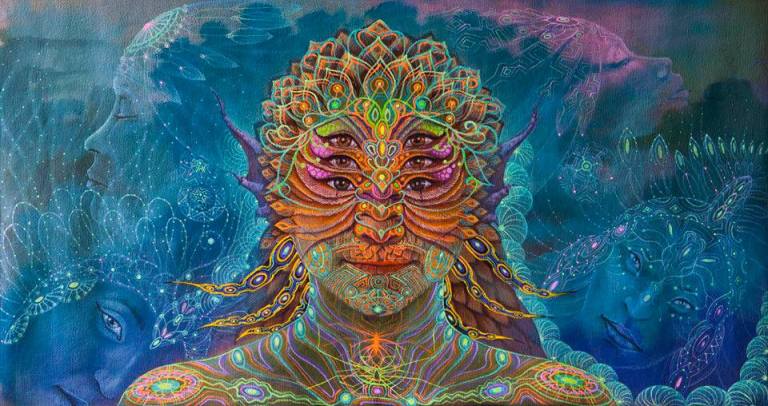 Beings and Forces by Satprem.