Samuel Liddel Mathers was born in 1854 at what is now 108 De Beauvoir Road, London, N.I.. His birthday is January the eighth, making him a Capricorn. Mathers claimed to be a descendant of the clan MacGregor and of Highland Scottish blood. Thus, this is why he added the name “MacGregor.” Mathers, according to William Butler Yeats, had two ruling passions in his life: “magic and the theory of war.” (It is interesting to note that although Mathers studied and wrote about military techniques, he was a
strong vegetarian and avid anti-vivasectionist.)
It was Mathers who made the first English translation of Knorr Von Rosenroth’s, “Kabbalah Denudata.” This work was commissioned by Dr. Woodman and Dr. Westcott. It was about that time that the first discussions of the Golden Dawn were taking place. Mathers had an additional mentor who probably had the most impact on his life. This was Dr. Anna Kingsford (1846 – 1888), and it was to her that he dedicated the “Kabbalah Unveiled.”
Dr. Anna Kingsford was one of the early fighters for women’s rights. This characteristic was adopted by Mathers who demanded that women share equally in all ways in the Golden Dawn. She was also an anti-vivisectionist and a vegetarian. And, at a time when almost every male in English society smoked a pipe or cigar, Mathers was a non-smoker. Without a doubt that Dr. Kingsford, as a friend and as the leader of the Hermetic Society, was of great influence on the young and impressionable MacGregor Mathers.
Mathers used two mottos in the Golden Dawn. One was his Outer Order motto and was the motto of the entire MacGregor clan. The other comes from a mars talisman. They are respectfully:

D.D.C.F. which stands for Deo Duce Comite Ferro, meaning “God as my guide, my companion a sword.”

Unlike many back then and even now, Mathers dedicated his entire life to the Western Mystery Tradition and to the magical way of life. He was not only the Chief of the Second Order of the Golden Dawn, he was the author of almost all of the important Golden Dawn teachings and documents. He masterfully took a dry system of angelic magic brought forth by the early British Astrologer Dr. John Dee and developed it into what may very well be one of the most powerful magical systems in the world.
Much of what we know of the Tarot comes from Mathers and his wife. Today, we take the Tarot for granted, but without the ground breaking work of Mathers and the Golden Dawn, our Tarot symbolism might be basic and trite. Also, the Z Documents of the Order were gigantic contributions in the area of magical methods and techniques. To this day, most reputable sources on invocation, skrying, divination etc. borrow from the Z Documents knowingly or unknowingly. (The Z Documents should not be confused with Z-5, a series of books by Patrick Zawelski.)
Mathers was an eccentric. He loved the drama of good ritual. He often dressed in his Highlander garb when working on or with the Celtic pantheon. Later, he would change his living decor to Egyptian as he produced the public invocation to Isis in Paris. These invocations were very successful, and it was Mathers who brought forth the Egyptian pantheon into the Golden Dawn.
Mathers was seemingly very good with language. He was able to read and translate English, Hebrew, Latin, French, Celtic, Coptic and Greek. This, in itself, is quite interesting in that there is no record of him being taught so many languages in school. He must have learned them through another source or in another way.

The Tarot: A Short Treatise on Reading Cards (French)

The Qabbalah Unveiled (1888) [Originally in Chaldee, but he translated the seventeenth century version of the Kabbala Dunatta by Knorr Von Rosenroth from Latin.

The Grimoire of Armadel (French)

The Tarot, Its Occult Significance and Methods of Play (1888) (French?)

The Key of Solomon the King: Clavicula Solomonis (1889) (Hebrew)

The Sacred Magic of Abramelin the Mage (1896) (French)

Mathers has been much maligned by authors such as Crowley. Even many modern authors have portrayed a negative view of him. However, many of these authors had connections to organizations that broke away from Mathers and the Golden Dawn.
S.L. MacGregor Mathers, in many ways, remains somewhat of a private individual. No one really knows how he died. Violet Firth (Dion Fortune) claimed it was from the Spanish Influenza of 1918, but at best this is probably just a guess on her part. Moina Mathers claimed he was coherent right up unto the time of his death and that exhaustion from years of work with the secret Chiefs of the Third Order was responsible. It is very peculiar indeed that no body or grave site has ever been located of MacGregor Mathers, and there is no cause of death on his death certificate.
Whatever Mathers was or has become, in our minds, his work lives on in the life and Light of the Golden Dawn. 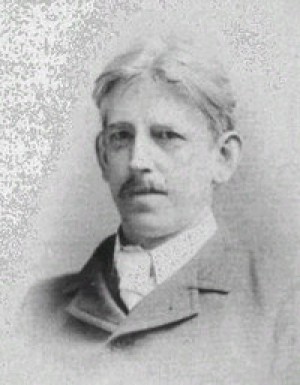